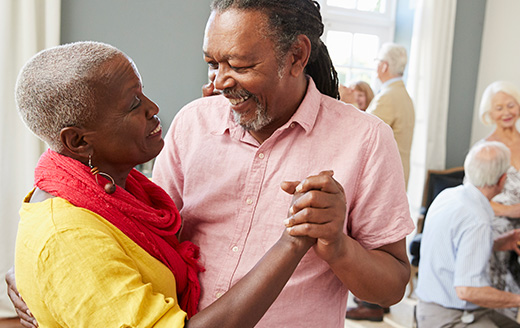 We all have unforeseen occurrences that seem to put a wrench in our plans: fender benders on the morning commute; a lice outbreak in your kid’s class; jury service on your vacation days. Perhaps the most devastating is bad medical news from your doctor.

Learning that you have a health condition forces you to rethink and restructure life as you know it. With doctor appointments, lab tests and medication management on the horizon, how will you cope? Will you fall victim to a diagnosis? Will you march on, refusing to let your illness consume you? What will be your outlet? Consider dance!

The mental and physical benefits of dancing are undeniable (and chances are your doctor has already prescribed exercise as a means to get and stay healthy). According to Psychology Today, dancing releases endorphins, brain chemicals that promote satisfaction, euphoria and high pain tolerance. Dancing is like your happy pill.

Arthur Murray Dance Studio Royal Oak student Keith Rossin found happiness in dance despite his health setback. Keith suffers from glaucoma, a group of eye disorders that damages the optic nerve and affects vision. The eye drops he uses to battle his condition cause his blood pressure to drop, making him hypotensive. While hypotension can lead to dizziness and other symptoms, Keith, a retiree, makes dancing a priority by visiting the studio once or twice per week. After a session one evening, he checked his blood pressure and was surprised to find that it had stabilized for several hours! He was so excited that he called the dance studio from home to convey the good news. “The benefit was so visible that I just wanted to share that,” he said.

For Keith, the human connection of dance, hearing Latin and swing music and “being in a beautiful studio around lovely people” contribute to his overall “emotional enjoyment.” He says the added health benefit he has seen with his blood pressure only “sweetens the deal.”

For Anuradha K. Ganpati of Los Angeles, dancing became therapeutic after she learned she had breast cancer. The wife and mother of two had studied, practiced and taught the classical dance of south India, Bharatanatyam, for years. However, her art came to a halt after a grim diagnosis in 2010, followed by multiple tests, a double mastectomy and reconstruction, lymph node removal, chemotherapy and radiation.

During and after treatment, Anuradha needed physical therapy and time for her surgical incisions and radiation burns to heal. She experienced weight gain, edema, hair loss, sensitivity to light and food, nausea, brain fog, loss of balance, dark moods, pain, bouts of neuropathy and cramping. Despite the overall trauma to her body, mind and soul, she returned to dance.

“Interestingly, I became more motivated about dance after my treatment,” Anuradha said. “I attended class more regularly, perhaps because I had more time and was, more often than not, in a better mood after a class. I felt more energetic, my day had more purpose and there was a sense of well being.”

Anuradha lost mobility in her right arm due to surgery and attributes dance and physical therapy to helping her regain full mobility. What should have taken six months to recover only took her three. “The exercise made me sweat and use every inch of my body and fingers and toes,” she recalls. Her dance instructor is Viji Prakash. At the time of Anuradha’s return to dance, Ms. Prakash and her then cancer-ridden husband suggested that Anuradha work towards a formal, two-hour solo dance performance on stage called an “Arangetram.”

“In the Indian classical dance context, the Arangetram performance is an offering, a milestone marker of the end of learning the foundations of a complex art form and beginning of the next chapter,” Anuradha explained. Initially, she was hesitant to go forward with an Arangetram. “Usually the debut dancer is in her late teens because it requires that kind of stamina, rigorous training, fearlessness, fitness of body and mind, and focus without commitments and responsibilities,” she said. Yet, Anuradha knew her instructor’s husband would not live much longer and that it would mean a lot if she accomplished this goal. Brushing off any excuses, her friends and family encouraged her to go forward — and that she did! A year later (in September 2015), Anuradha performed her solo Arangetram to a packed audience.

The old adage “when life gives you lemons, make lemonade” could not ring more true when one’s health is comprised. By not limiting themselves, Keith and Anuradha directed their energy toward their passion. Let us find your passion in dance! Call us at (248) 548-4770 or click here to see how our lessons might help ease setbacks in your own life.