How Guys Used to Get the Girl and Why You Care 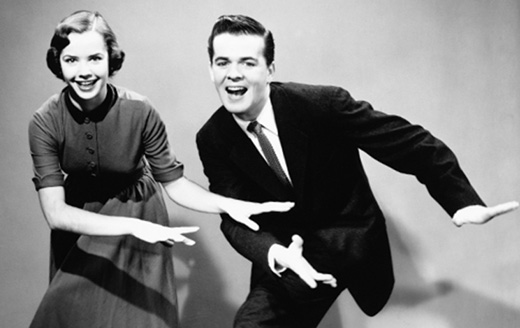 For guys, dance used to be everything – meaning, it used to be the single most direct and necessary route to spending quality time with “the” girl. That band would strike up, and that was his cue to go snag the hand of the girl he’d had his eye on. How did guys know how to move? Well, learning to dance was as integrated into a decent upbringing as learning to have a conversation.

Why? Because in the 40s and 50s, dancing was at the center of any worthwhile social event. Our parents used to create dance floors in their basements where friends would come together, have cocktails, and dance together for real. And by “for real,” we mean legit dancing – not this sort of grinding that’s evolved in gritty bars and nightclubs. Guys were held to a higher standard – it was about romancing and fun more than it was about pricy dinners or that aforementioned talentless “club grind” that not only is unimpressive, but a little, eh, ick.

Of course, it was easy for guys to get on board with dancing then. Consider the famous movie dancers who inspired the normalization of dance: Fred Astaire, Ginger Rogers, Danny Kaye and Vera Ellen. In fact, let’s talk about those last two for a minute because it’s one single performance in White Christmas that really sums up the powerful role of dance for men. If you haven’t seen “The Best Things Happen While You’re Dancing,” take a few minutes to check it out. Go on, we’ll wait.

Those goosebumps are infectious, aren’t they? We know. The fact is, for guys courting girls, the best things do happen while you’re dancing. As Kaye says, “Things that you would not do at home come naturally on the floor.” And that’s why it’s more powerful than any other dating experience.

So what happened to all of that? Well, Matt Tennant will tell you the power of dancing in a relationship is honestly still alive and well. He’s been leveraging his dance skills to win the heart of “the” girl for 3 months now. “I want to be able to lead any lady that I come across, at any time. I want her to look at me like I know what I’m doing”. And he’s not alone. He’s one of the many guys who are in the Arthur Murray studio doing exactly the same thing and reaping the rewards.